Since 2009, Maharat has taken an active role in electoral media monitoring and continuous monitoring of elections. In 2016, Maharat monitored the municipal elections for the first time from a gender perspective. With 113 women candidates running for the parliamentary elections in 2018, our media monitoring stressed on women representation in the media and studied the communication of women candidates. Findings of the study were used to engage with journalists and the media to encourage more gender sensitive media coverage and to design training programs on effective communication for women leaders. 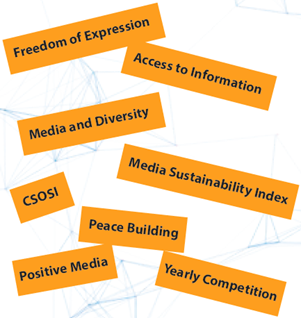 Maharat continues to produce training manuals and materials, often in partnership with media faculty at Lebanese universities, on a range of freedom of expression issues, including media ethics (2009), access to information law (2009-2010), media and diversity (2014), media sustainability index (2014-2016), civil society organisations sustainability index or CSOSI (2015-2017), and peace building (2015-2016). Additional work with media faculties included yearly competitions in media faculties on freedom of expression, positive media and innovation from 2014 to 2016.