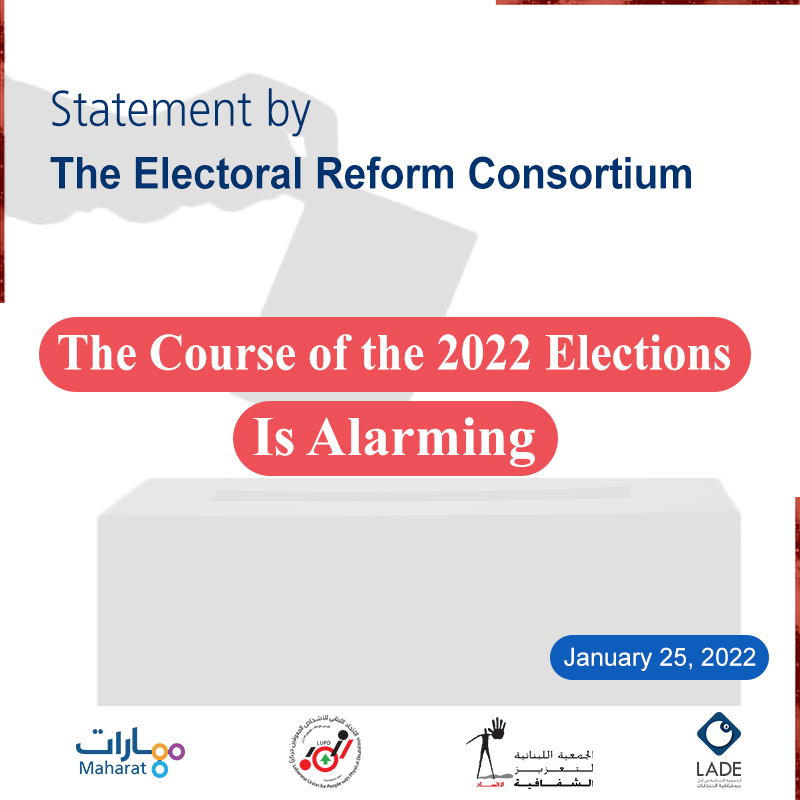 The Course of the 2022 Elections Is Alarming

The deadline for the formation of the Election Supervisory Commission was on November 21, 2021. The deadline ended without the commission’s formation due to the failure of the Council of Ministers to meet. However, a new commission should have been appointed since late 2018 according to Law 44/2017, and with the Council of Ministers reconvening today, the coalition was surprised by not including the appointment of the election supervisory body on the council's agenda even though we are less than four months away from the elections’ date.

Hence, the coalition warns against the delay in forming a new Election Supervisory Commission after months of postponement. We had hoped from the Minister of Interior Affairs and Municipalities as well as the Lebanese Prime Minister to include a clause for the formation of a new Supervisory Commission and to disburse the necessary funds for it to carry out its work. Also, to meet their promises and commitments to the Local and international communities to hold the elections on their constitutional date, in an atmosphere that contributes to enhancing the integrity of the electoral process and respecting its course in order to prevent it from being distorted or challenged.

Noting that in the absence of the formation of a new supervising body, Article 11 of Law (44/2017) stipulates that the existing body shall continue to follow up on its tasks until a new body is appointed. Until now the commission has witnessed the resignation of two members, and accordingly the coalition fears that if the resignations continue, it would create an obstacle to securing the necessary quorum (7 members at least) to hold the meetings and take the necessary decisions according to Article 21 of the law. In this context, the coalition calls on the Ministry of Interior and Municipalities and the Supervision Commission to adopt a transparent approach in addressing public opinion regarding the issue of resignations and the issue of the quorum for meetings, due to conflicting information about this.

Since the names of the members of the new supervisory body are ready, according to a statement by the Minister of Interior and Municipalities to the "Middle East News" on December 13, 2021, the coalition demands the necessity of appointing a new body or appointing new members in the vacant places within the current body without any further delay, since filling the vacant seats is subject to the same mechanism, as well as monitoring and disbursing the necessary funds to the ESC in order to enable it to carry out its work immediately. Noting that its work begins before the date of opening the door for candidacy according to the deadlines stipulated in the law, which was previously determined by the Ministry of Interior and Municipalities on January 10, 2022 according to an issued circular.

The coalition also calls for approving the budget allocated for the elections, as the reluctance of the executive authority in carrying out its tasks related to the electoral process and its preparations increases doubts about the extent of its seriousness in conducting the elections and the necessary for it.