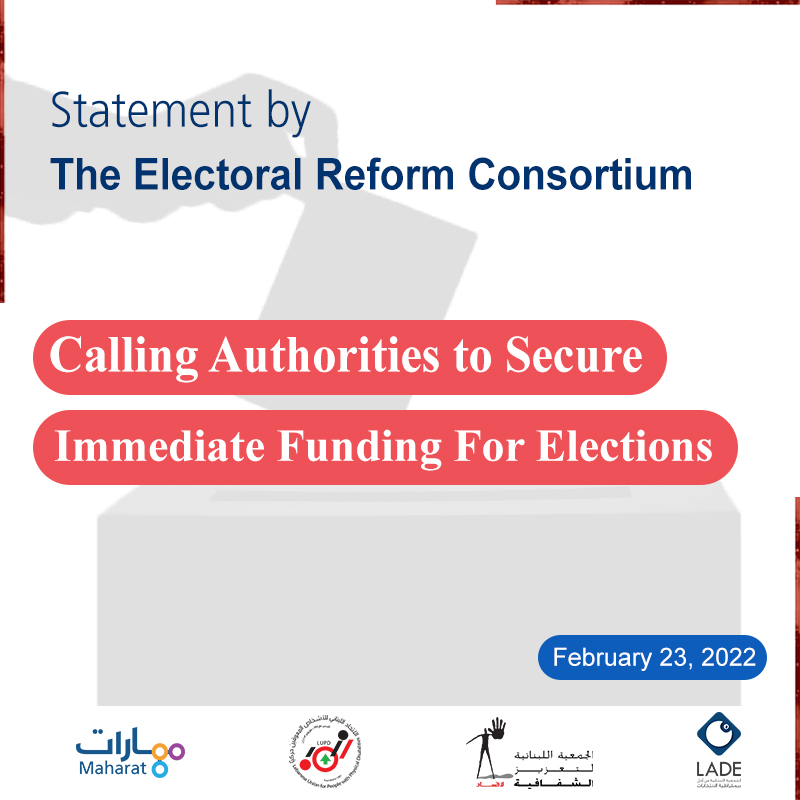 The Electoral Reform Coalition warns once again of the possibility of disrupting the parliamentary elections scheduled for May if the necessary funds are not secured. The coalition requests the convening of an immediate general assembly of the parliament to discuss and approve the general budget for the year 2022 and the additional appropriations allocated, including those for the elections.

Although the decisions of the last session of the Council of Ministers on February 15, 2022 included a decision to refer a bill to the parliament aimed at opening an exceptional additional appropriation in the general budget for the year 2022 in the amount of 320 billion Lebanese pounds in order to cover the parliamentary elections, it was signed by President Michel Aoun on February 18 2022, in addition to signing another decree to transfer a financial appropriation from the general budget reserve worth 35 billion Lebanese pounds to secure part of the expenses of holding the upcoming parliamentary elections.

And although at the beginning of this week there was a general parliamentary session, which was held on Monday, February 21, and the session scheduled for Tuesday, February 22, 2022, was adjourned due to the lack of a quorum, its agenda did not include any item for approving the budget or securing a special budget for the parliamentary elections.

The coalition expresses its concern that the parliamentary session has not yet been called to approve the general budget and the allocations for the elections, especially since we are only less than 70 days away from the date of holding the elections. All indications indicate that the logistical and technical preparation for the elections has not started, contrary to all the statements and pledges made. This includes officials in their meetings, public appearances, and media statements, including the recent cabinet meeting, which gave the impression that the issue of solving the election budget had moved on.

The coalition calls for the Parliament to meet immediately to discuss and approve the budget and the additional appropriations to secure the necessary funding to hold the parliamentary elections on time. The time has become urgent to secure fairness, democracy, and the integrity of any electoral process in light of the procrastination and uncertainty in resolving the issue of providing the necessary budget for the elections.

To check the statement in PDF