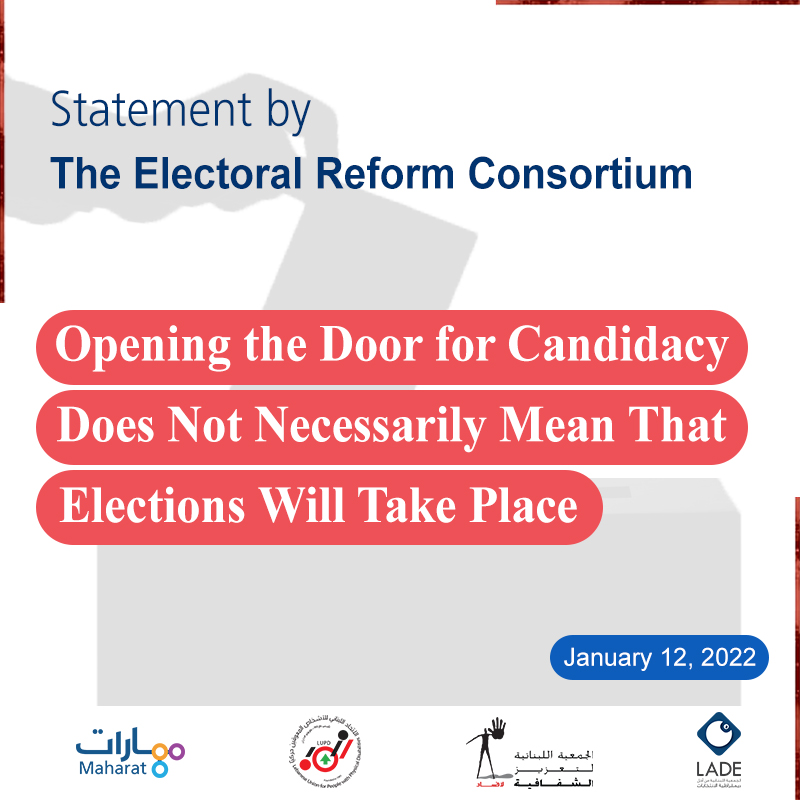 The overall atmosphere surrounding the electoral process is still characterized by uncertainty and paralysis. The Electoral Reform Consortium raises a series of questions for the concerned groups, as opening the door for candidacy and inviting the electoral bodies does not necessarily mean that the elections will take place. So far, the Council of Ministers has not met yet to approve the budget for elections, and the necessary funds have neither been allocated nor spent.

Additionally, the supervisory commission on elections is still not appointed to date. The commission was supposed to be appointed by the Council of Ministers since late 2018, in other words, it was supposed to be appointed 6 months after the end of the last parliamentary elections. The commission has many crucial roles, such as spreading electoral culture, monitoring electoral spending, as well as monitoring electoral media and advertising. Today, and in light of the disruption of cabinet sessions, in addition to the absence of funds for elections, and the absence of the previous body and its lack of willingness, the consortium wonders how did the authority open the door for candidacy and invite electoral bodies, while the government and the Ministry of Interior and Municipalities are absent from following up and managing the electoral process? How, for example, can the electoral campaigns begin without the presence of a new commission, or the old commission receiving requests from the media outlets wishing to participate in the electoral campaigns?

According to Elections Law No. 44/17, Article 71 concerning “Paid electoral advertising and broadcast:

a. Paid electoral advertising and broadcast through media and advertising outlets shall be allowed in accordance with the following provisions:

Moreover, according to Article 19 of the current election law, spreading the electoral culture is one of the most important responsibilities of the supervisory commission, but to this day we do not know the fate of the current commission, while the time frame separating us from elections is only four months. The same article also stipulates that the commission receives requests from visual, audio, print and electronic media wishing to participate in covering the voting and counting process, and delivers the necessary permits for this, and sets rules of conduct for media coverage, which has not been done so far.

Consequently, there are no appropriations for the old commission, no appointment for a new commission, no budget for the elections, nor for its human units, as well as no meeting of the Council of Ministers... All of these are dangerous indicators that show political paralysis which is directly affecting the process of the elections.

Based on all of the foregoing, the coalition stresses today that the Ministry of Interior and Municipalities, as well as the government, have a great responsibility to ensure that the elections will be held on the constitutional date and to secure all the necessary to ensure a fair electoral process.