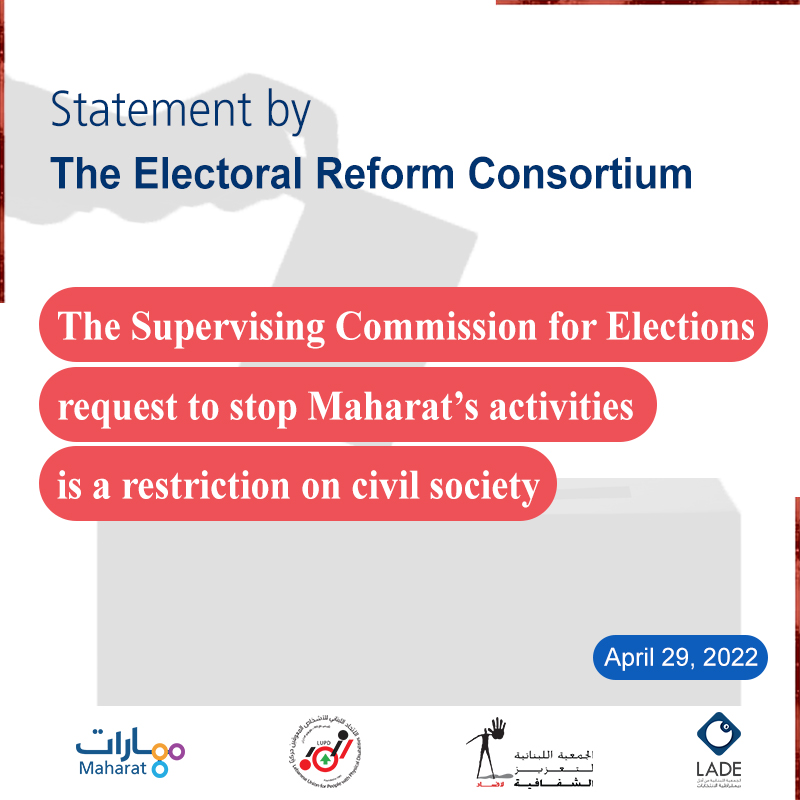 The Electoral Reform Coalition expresses its concern about the atmosphere of increasing restrictions on public spaces in Lebanon and the freedom to express opinion and expression in general, the latest of which is the restriction practiced by the Supervisory Commission for elections within the framework of its narrow interpretation of the electoral law, especially Article 20 related to keeping pace with and monitoring the electoral process by civil society.

This comes following the two letters that the commission sent to Maharat Foundation on the matter of the association’s work, which the commission considered as “participating in accompanying and supervising the elections illegally,” as part of a series of correspondences between the commission and Maharat, which the commission published on its official website page of the parliamentary elections in the category of statements and decisions, including only two letters without Maharat’s responses. Publishing part of the correspondence without Maharat’s reply or publishing any of the violations or other warnings to any violating party is considered selective to suggest that Maharat’s work is illegal, while it would have been more useful for the commission to adopt the highest standards of transparency in publishing all correspondence, warnings, violations, decisions and statements related to the electoral process in accordance with the law of the right to access information.

The coalition stresses that Article 19 of the electoral law, which stipulates the commission’s tasks, specifically Paragraph 9, to accept and assess the requests of electoral observers and grant them permits, and Article 20 to which the commission refers, which gives it the authority to consider requests to “keep up with the elections and monitor their course,” confirm that the commission’s authority is limited to granting Permits for local observers to keep pace with the operational process of the elections on the ground and to monitor the executive proceedings and to obtain permits that authorize them to enter public administrations and polling stations. What makes Maharat foundation’s activity in monitoring media performance during election campaigns does not fall within the concept of keeping pace with the elections and observing their course stipulated in Articles 19 and 20.

The commission’s failure to acknowledge Maharat’s clarification, as it stressed that its office work does not require being on the ground and obtaining licenses to enter public administrations or polling stations, is a worrying indication of restrictions on civil society associations and their freedom to access, analyze and publish information, as any individual or researcher, or an association, or even the private sector, can and has the right to monitor the elections, each within his jurisdiction and from his office, and this is a legitimate right in a democratic country whose constitution guarantees freedom of expression, freedom of information circulation, and freedom of association. Note that Maharat Foundation has always issued electoral media monitoring reports since 2009, including 2018, it has also provided technical assistance to the Supervisory Commission for elections headed by Judge Nadim Abdel Malik in 2018, and also trained the commission’s monitors and helped in preparing its monitoring system.

The coalition rejects this restriction by the supervisory commission on Maharat Foundation and demands the commission to revert to its narrow interpretation of the law. The coalition supports Maharat’s continuance of its work and the reports it issues within the framework of its legitimate right to support public debate on the implementation of public policies and issue recommendations regarding them, especially that the narrow interpretation of Article 20 would aim to restrict all the work of all associations, researchers, and academics who analyze and publish information and data if they include any criticism of the electoral process or the role of public bodies and authorities.

The coalition also calls for the need to immediately start after the elections a workshop to reform electoral laws and clarify texts so as not to use them as excuses to restrict the work of civil society and to go immediately to a fundamental reform that Maharat and the Electoral Reform coalition have always demanded, which is an independent Management Body for the Elections.

To check the statement in PDF: