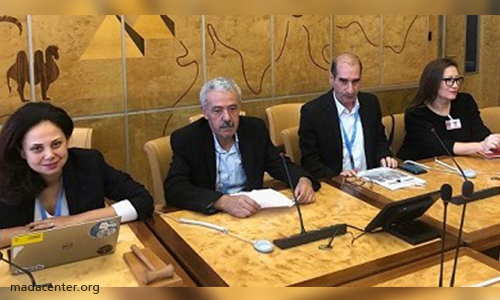 Four human rights organizations launched on the 26th of November a meeting to initiate a network to fight hate speech in the MENA region. The meeting gathered MADA, Gulf Center for Human Rights, Maharat Foundation, and the Syrian Center for Media and Freedom of Expression. The meeting was held on the sidelines of the Internet Governance Forum that took place from the 25th till the 29th of November.

The head of MADA introduced the objectives of the network that are “defining hate speech and its boundary with freedom of expression. In addition to rasing the awareness of journalists and activists on how to deal wth hate speech on social and mainstream media”. He added that “we worked in MADA on training Palestinian journalists to fight hate speech and we launched a training guide and a code of conduct for journalists and we are ready to share our experience in the Arab region”.

According to the head of the Gulf Centre for Human Rights Khalid Ibrahim, the importance of this network is promoting forgiveness, dialogue, non-violence, and peace building; in addition to networking and coordinating among difference local, regional and international organizations that work in this field.

The executive director of Maharat Foundation Roula Mikhael said that “it is necessary to have a network fighting hate speech, and to have constant communication with social platforms to influence their policies in fighting hate speech in our region and ensuring the protection of freedom of expression and encouraging a content that promotes social peace”.

The founders called all interested stakeholders in fighting hate speech in the MENA region to support the network and its effort to promote social peace in the region.

It is to note that the network is a coalition of a group of organizations aiming at uniting their efforts to fight hate speech in the region in cooperation with relevant CSOs and different international organizations that shares the same objectives especially the United Nations that has program for fighting hate speech.