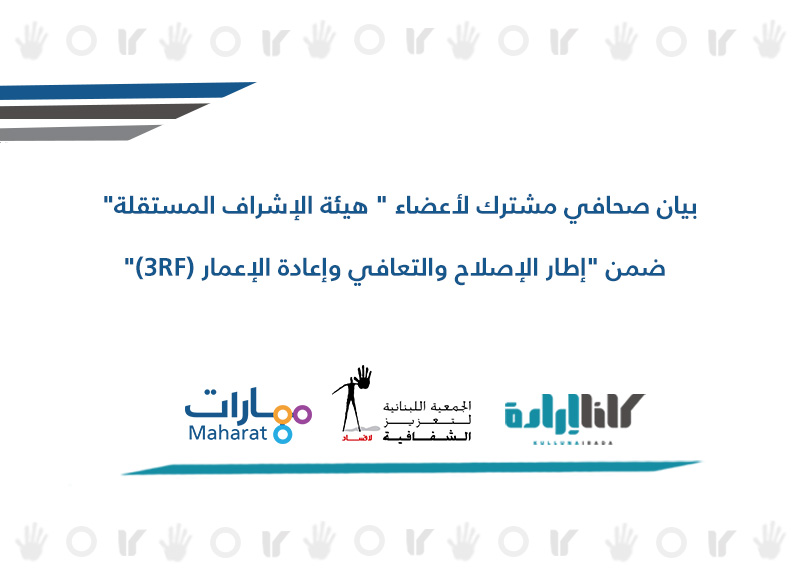 1.  In the context of the Reform Recovery and Reconstruction framework (3RF) set up by the international community to support Lebanon after the Beirut blast, and one month after the second consultative group meeting, several occurrences reaffirmed the lack of seriousness of the Lebanese officials in advancing reforms and promoting transparency.

2.  The IOB holds the national officials accountable for the delay in government formation and its ensuing irresponsibility in performing the duties which fall under its scope amid the country’s state of collapse. A case in point is the national anti-corruption commission; a year after the legal obligation to appoint the members of the commission which was due on the 14th of September 2020, the caretaker government still didn’t convene to fulfill such a legal commitment. The IOB reiterates its call for the formation of a government with credentials not least to reinstate the rule of law, as the governmental deadlock is exacerbating the damage it has initially created.

3.  The government’s cost of inaction resulted in a 19-year timeframe to recover from the crises according to the World Bank, a tripled unemployment rate from 2018 standing at 40%, 88% loss of purchasing power since 2018, and a ninefold decrease in the minimum wage. A potential responsible government should pass a budget inclusive of a comprehensive macro-fiscal plan that stabilizes the economy and puts it on the recovery path.

4.  At the level of committed reforms, the IOB calls on the Lebanese Parliament (LP) and Government (GoL) to pass and implement the needed reforms’ laws to unlock indispensable aid. The public procurement law #244/2021 is a modern law that has been the subject of attention since it’s among the most important structural reforms necessary to strengthen fiscal governance, enhance transparency, and combat corruption. Four articles of the law were challenged before the Constitutional Council (CC) pertaining to training, complaints and returns, appointing the head of the public procurement authority, and the mechanism of appointing members of the public procurement and reference bodies. Should the challenge be accepted by the CC similarly to a previous case regarding the nomination of Grade A public servants, more specifically the provisions related to the governance of the public procurement cycle, The LP is immediately requested to review the law and integrate the necessary provisions that wouldn’t distort any of its pillars and render it virtually and practically unworkable, and most importantly, not to delay its implementation. The IOB rebukes any effort made to delay progress or render laws regressive.

5.  At the implementation level of the access to information law, the IOB looks positively to the new “National Monitor” initiative launched by the Presidency of the Council of Ministers which aims to promote transparency and access to information. Consequently, the IOB calls the GoL to complement the initiative by including information officers in all public administrations. The IOB calls for the full implementation of the Right to Access to Information law (28/2017) and for necessary amendments whether in the decree or law to limit the exceptions by applying the “Harm v/s Public Interest” test when considering withholding information. The IOB further requests the administrations to start proactively disclosing information publicly. Despite the public calls urging the MoEW to publish the contract between Lebanon and Iraq to import fuel for EDL, and the pertaining adopted mechanism, in addition to the bidding documents that led to ENOC winning the Iraqi swap contract, the MoEW did not respond. Moreover, the implementation of Law (462/2002) has become of critical importance starting with the creation of the Electricity Regulatory Authority (ERA), and its respective modus operandi. Such a step would allow the Lebanese State, the sole duty bearer in putting in place the needed policies and regulations related to the power sector, to play a more efficient role in fulfilling such a right.

6.  The B5 Fund, a cornerstone of the 3RF, has been finally activated with a $25 million grant agreement which will be managed by KAFALAT. The IOB will have a proactive role in ensuring transparency, fairness, and accountability in resource allocation.

7. The IOB advocates for the greater inclusion of civil society in the disbursement of the upcoming SDR allocation to Lebanon, given the absence of a national vision delineating the funds’ strategic spending. Greater transparency regarding the disbursement should be complemented with a process that allows civil society to weigh in on and monitor the use of funds.

8.    Regarding the ESSN project, the IOB welcomes the long-awaited clearance from the MoF to disburse the cash assistance payments in dollars. The IOB warns from the cost of delay by the parliament in meeting the remaining conditions for the actual disbursement of payments amid the deteriorating economic conditions, and cautions against misuse of the beneficiary selection.

9. Parliamentary elections are a cornerstone for the democratic transition that Lebanese citizens are aspiring towards and political actors should ensure a timely, transparent and inclusive process. The IOB strongly believes that an Independent Management body and Administration should be commissioned to manage the elections process, be it legislative or municipal. However, and since the current electoral doesn’t include such a provision, and mandates the supervision of elections to an electoral commission, the IOB urgently calls for the formation of a new supervisory commission for the upcoming elections as per law (44/2018) before October 2021 through a transparent and fair process.

10. The IOB commends Judge Tarek El Bitar’s efforts in pursuing justice in the Beirut port blast case. The IOB calls on the Lebanese parliament, Higher Defense Council and relevant ministries, to respect the due process of law and immediately lift immunities on the concerned individuals.

11.  The IOB strongly reaffirms the urgent need to form a government that is able to gain the confidence of the Lebanese people and the international community in managing and resolving the many fold crises.

Kulluna Irada is an advocacy group committed to political reform in Lebanon. It is engaged in defining the foundations of a modern, sustainable and just state, and in coalescing local and international actors around this vision to create momentum for change. The organization pairs extensive policy expertise with civil society engagement and advocacy tools in order to raise awareness on public issues and implement sustainable solutions. Kulluna Irada is funded exclusively by Lebanese citizens in Lebanon and abroad. The organization’s internal governance is based on collegial decision making and strict rules on conflict of interest: board members have vowed not to run for elections or participate in any public auction.

Founded in 1999, in a bid to curb corruption in Lebanon through civil society, the Lebanese Transparency Association (LTA) advocates for reform by focusing on systemic improvement and by building coalitions with other anti-corruption stakeholders, including the government, parliamentarians, the private sector, media institutions, the international community, and civil society organizations. The organization resorts to all appropriate means to fight corruption, improve the quality of life, and encourage civil society to take measures towards transparency and accountability.

Maharat is a women led, Beirut based organization, working as a catalyst, defending and advancing the development of democratic societies governed by the values of freedom of expression and respect for human rights. Maharat advances the societal and political conditions that enhance freedom of expression and access to information, both online and offline. Maharat engages and equips a progressive community in Lebanon and the MENA region with the skills and knowledge necessary to create change.