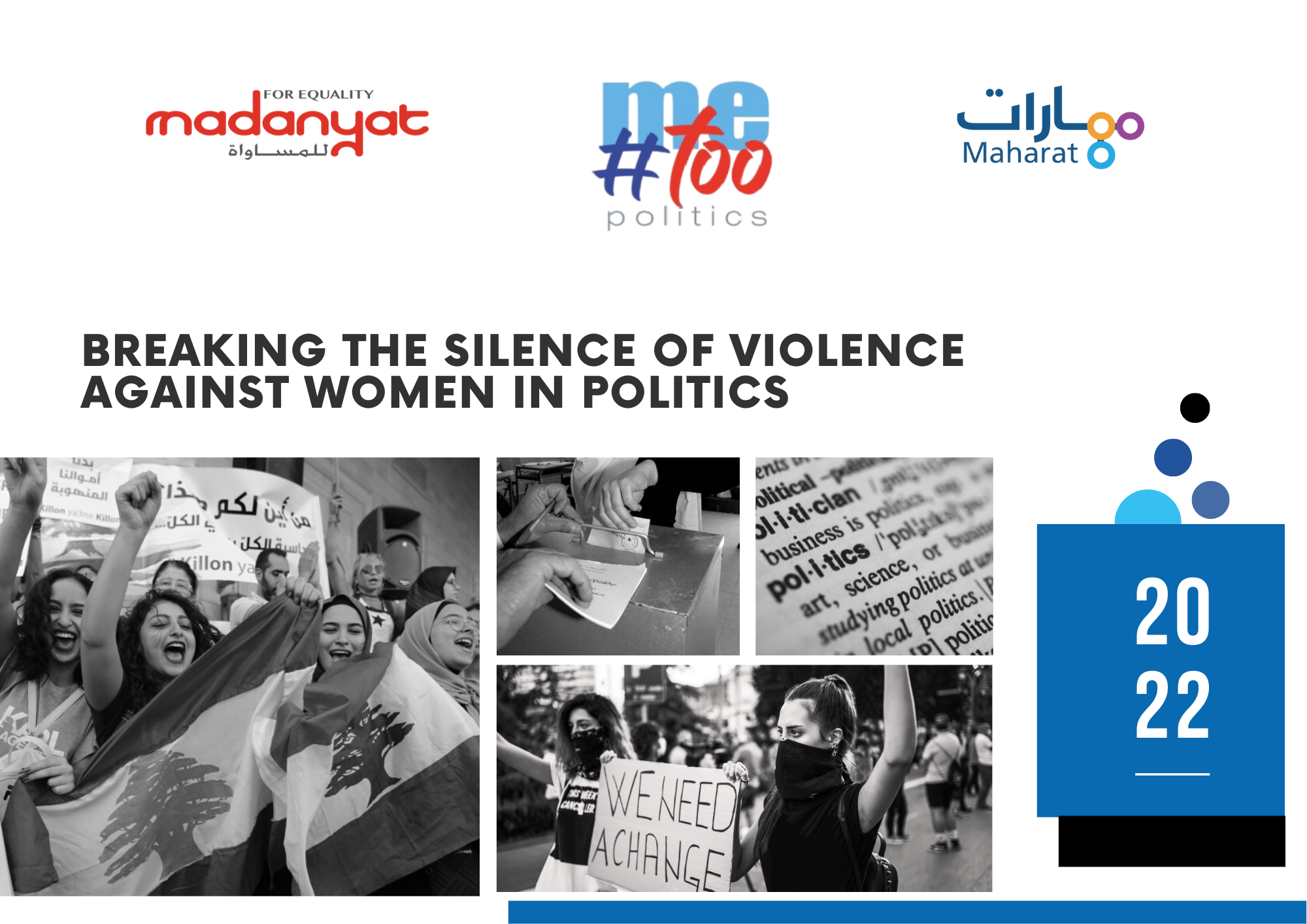 Breaking the Silence of Violence Against Women in Politics

In order to remedy the lack of available data on VAWP in Lebanon, Madanyat and Maharat Foundation, as part of the #MeTooPolitics project, produced this report documenting women's experiences in politics through 4 focus groups based on a questionnaire conducted in Beirut, Mount Lebanon and South governorates, aiming to provide quantitative and qualitative data on VAWP. A sample consisting of 15 young female activists and politically engaged women from both established and emerging political groups, 22 female journalists, and 18 female candidates for the parliamentary elections of 2022 participated in these focus groups to share their personal experiences and testimonies on the prevalence of VAWP. In addition, meetings were organized with 8 parliamentarians and 1 member from the Supervisory Commission for Elections.

The findings of the quantitative study revealed that 80% of respondents acknowledged having experienced VAWP, demonstrating that it is a widespread phenomenon in Lebanon. However, according to those findings, only 39% of cases of VAWP experienced by participants or one of their colleagues have been reported. This could be linked to the absence of a complaint mechanism as 60% of participants estimated that no means or methods were available to report the complaint. Furthermore, findings showed the prevalence of online violence against women in politics on social media.

The qualitative findings demonstrated that different forms of violence are experienced by female activists and women in politics. Those findings also emphasized the fact that the patriarchal system brutally responds to any change that emancipated women might bring about, especially at the political level, traditionally assigned, and dominated by men.

Maharat and Madanyat call on policy-makers to create a legislative framework that would prevent VAWP, protect women from all forms of violence and end the impunity of perpetrators. Maharat and Madanyat also call on civil society to encourage more female victims to break the silence on their own experience of violence and report cases of VAWP. Media should also adopt gender-sensitive reporting when covering cases of VAWP. Social media platforms should also moderate content related to VAWP to prevent gendered disinformation, hate speech, online harassment, cyberstalking, blackmail, and cyberbullying.

To check the report in English:

BREAKING THE SILENCE OF VIOLENCE AGAINST WOMEN IN POLITICS

To check the report in Arabic: