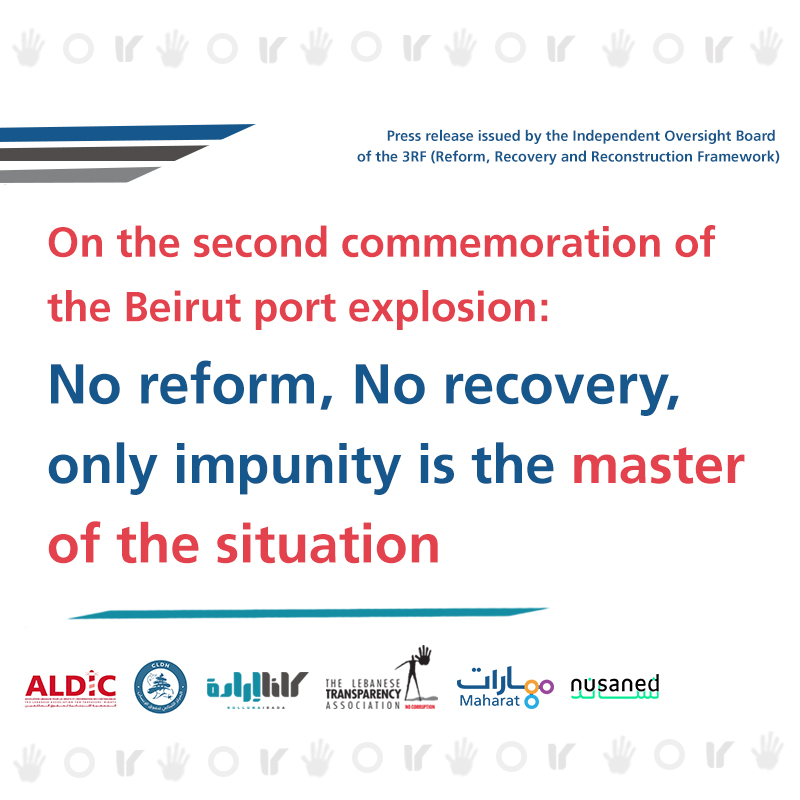 On the second commemoration of the Beirut port explosion: No reform, No recovery, only impunity is the master of the situation

On the two-year commemoration of the Beirut port explosion, the Independent Oversight Board of the Reform, Recovery and Reconstruction Framework re-examined what has been achieved since the launch of the recovery plan, which pursues two tracks in parallel, a people-centered recovery track and a reform and reconstruction track.

This plan provided a voice for civil society at the level of the consultative group (CG) and at the oversight level by appointing members of the Independent Oversight Board from the civil society. The consultative group formed of multistakeholders including the government, civil society and the international community held till date 4 consultative meetings. The responsible stakeholders sought to secure the appropriate framework to implement the terms of the plan that was officially approved within the ministerial statement of the Mikati government. However, the last meeting that took place in this context on April 4th, 2022, at the Grand Serail showed that most of the reforms are still within the "in progress" status, meaning that none of the reforms, yet, has been achieved.

It is significant to point out that the reforms included within the recovery plan are structured around four strategic pillars:

On the 4th of August’s commemoration, the independent oversight board reminds that the state, with all its institutions, did not make the required efforts to respond to the requirements of the economic, social and financial crises that Lebanon is going through and the humanitarian crisis that erupted after the port explosion; regardless of the government hosting constant meetings at the Serail, or ministries and relevant institutions participating in the consultative working groups, yet what reflects the seriousness of the response is what has been achieved and accomplished within those two years, and what has really been achieved is almost negligible.

In a review of the progress made by the (former) United Nations Resident Coordinator for Humanitarian Affairs, Najat Rushdi, during the last consultative meeting of the stakeholders at the Grand Serail last April, it became clear that the reforms were at a halt.

Therefore, we would like to point out on the following:

At the investigation level into the Beirut blast crime

Impunity still prevails within the investigation of the crime of the port blast, as the judicial investigation was obstructed and the overall investigations were put on hold due to lawsuit dismissals, whereby some of which were returned (without any fines for violating the procedures). The issue of immunities stood up in the face of the judicial investigation, and the newly elected parliament tried in the parliamentary session of July 26th, 2022, to form the Supreme Council for the Trial of Presidents and Ministers by appointing deputies by acclamation, which does not conform to the principle of fair trial, noting our reservation on all exceptional courts.

The independent oversight board considers that the state, with its executive and legislative institutions, committed constitutional violations by interfering in the work of judiciary and disrespecting its independence and the principle of separation of powers, which impeded the course of justice and placed barriers to the continuance of the investigation, thus delaying the course of justice in this crime, and enrooted the concept of impunity that began with the end of the civil war.

At the reforms level

As for the access to information law, most of the ministries directly involved in the Reform, Recovery and Reconstruction Framework still do not comply with the provisions of public disclosure according to Law No. 28/2017.

In addition, the electricity regulatory body that is a reform priority and the port's management authority have not yet been appointed.

To date, the national budget for the year 2022 has not been yet approved upon, despite the economic necessity. The law on the independence of the judiciary has not been approved upon. The National Commission for Human Rights is still without a budget and its work scope has been obstructed by the amendment of Law 62/2016, which linked the start of its work to the adoption of the decrees despite the oath.

This is in addition to the failure to pass the laws required to advance economic and financial reforms and the adoption of nominal laws, such as the banking secrecy law.

The newly elected parliament is required to abide by the implementation of the provisions of the recovery plan and should accelerate the discussion and adoption of the laws related to the reforms it stipulates, and to exercise its oversight role over the government’s work and hold it accountable for the implementation of these commitments, as soon as this government is formed. The caretaker government must use its powers as deemed necessary, and the designated prime minister must expedite the formation of a government that performs its duties and implements its obligations.

At the aids level

Four financing initiatives have been launched by the Lebanon Trust Fund to Support the Recovery program, the Fund for Better Rebuilding Business Enterprises in Beirut,The Beirut Housing Reconstruction and Cultural and Creative Industries Recovery Project, and the Project to Support Social Recovery Needs for Vulnerable Groups in Beirut and the Agreement on the Environmental Rehabilitation Program for Salt and Waste Management in Beirut.

To date, the interactive platform has not been launched, which was supposed to be the cornerstone of the public communication with citizens, to inform them of all grants, aids, and work done, and to provide complaints mechanisms.

More efforts are required from those responsibles of managing these grants to enhance public communication, listen to people and reach them in an inclusive manner to reach all affected people with transparency, as well as focusing on not providing any support that may be used to violate human rights, through establishing discriminatory and unfair mechanisms or that can harm official institutions and the transparency.