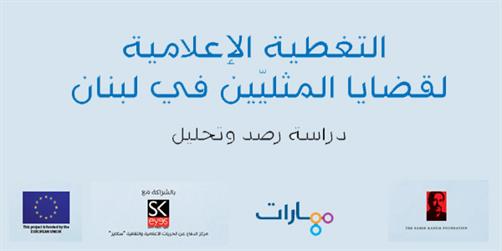 The Skeyes Center for Media and Cultural Freedom launched a report prepared by Maharat foundation on “Media Coverage of LGBT Issues in Lebanon” within a joint program that aims at building capacity of journalists in coverage of sensitive issues.

In its first section, this study reviews article 534 of the Lebanese penal code which is used to criminalize LGBT community in Lebanon. In addition to the development of  jurisprudence in explaining that article between the years 2009 and 2014 and the different media coverage that highlighted this issue.

The second section of the study focuses on the media coverage of LGBT rights’ violations. The three other sections include an analysis of media coverage of issues that attracted the Lebanese public opinion: “Plaza cinema”, “ Ghost nightclub” and “Hammam Al-Agha” issues.

Skeyes organized a workshop about “Media Coverage of LGBT Issues in Lebanon”. This workshop was held on November 11, 2014 in collaboration with Thomson foundation and Maharat foundation.

This study was published with the support of the European Union.